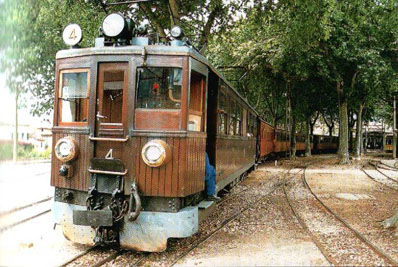 (Published in "In Motion")

If you have ever been to Majorca, maybe you have made the railway journey from Palma to Sóller: out of eight million visitors every year, about one million does. So you can see that it is a major attraction of the island. And quite rightly so: the line leisurely crosses some of the best landscapes of that very beautiful Mediterranean island. The usual trip starts in Palma, the capital city, easily reached from anywhere you might be staying at. You go to Sóller and spend a day in that nice town, where you can take a real tram to have a fish lunch in a restaurant in the port. It sounds enjoyable, and it is.

Sóller lies in a valley of the Tramuntana range, separated from the central plain of Majorca by quite respectable mountains. Actually, in the 19th century and before, it was easier to go to Palma by sea than by the incredibly winding road. So, if Sollerics had to board a ship anyway, it was just as easy to go to Barcelona, or Southern France, or America; they do retain a peculiarity, because their world was -and is- quite different from that of people just some miles away, the "wrong" side of the mountains.

When railways offered the means to overcome such isolation, Jeroni Estades undertook the task of promoting a new line. He wanted it to go by the nearby valley of Valldemosa, through landscapes of breathtaking beauty. This part of the island has been a favourite tourist destination for more than a century, since George Sand and Chopin chose it to live a famous romance. But scandals do not harm the attractive of places, do they? Later, the Austrian Archduke Ludwig Salvator, the British writer Robert Graves, and many other celebrities have chosen this side of Majorca to live or spend their holidays.

But it was very expensive to build. Estades could not find money to finance his wonderful project. A more direct approach, that involved boring a 2,857 meters long tunnel, and several shorter ones, was preferred by most prospective users. A society was formed and its shares were bought by practically everyone in the town. The gauge was to be one yard wide, chosen because all the previously laid railways in Majorca had it. These went from Palma to Inca, Manacor, Sa Pobla, Felanitx, Santanyí and Artà. In all, about 190 kilometers.

The building of the Sóller line started in 1907 and it was inaugurated in 1912. Of course, it was steam-hauled. The four engines were from La Maquinista Terrestre y Marítima, the coaches from Carde y Escoriaza, and the goods wagons from Orenstein & Koppel. The station in Sóller is quite probably the oldest one in the world: it is a noble stone building, dated 1606, and reformed to suit its new uses. And it had a good hotel and restaurant too.

In 1913 the Company inaugurated a 4,868 meters long electric tramway to link the town and the port. No one remembers why they decided to build it, when they might have just extended the railway to the port. It had the same gauge, one yard, and it worked with 600 volts D.C. from a motor-driven dynamo. Now we can only bless them, because it provides us with a delightful combined journey: first a vintage train, and then a real tramway to follow.

As the novelty wore off, travellers became more and more aware of the sad fact that smoke and sparks made the crossing of the tunnels rather an unenjoyable part of the trip. As soon as electricity became available, Mr. Estades had begun the work to bring over such an eminently desirable improvement to his beloved railway. Overhead wires were installed to carry 1200 volts. New electric units were bought from Carde y Escoriaza. The motors and other electric devices were built by Siemens-Schuckert. And the new service was inaugurated in 1929. The steam engines were sold to Ferrocarriles de Mallorca.

If Sollerics were already happy enough with their train, you can imagine their feelings when they were spared the ordeal of the tunnels. And the line, of course, became far easier to run. Steam may be good enough in the plains, but negotiating steep grades with small boilers and rather heavy trains was never an easy task.

In the Spanish mainland railways were already suffering under the competition from road vehicles. You had just one Beeching, but we had a whole host of them. That infamous people closed off most narrow gauge line and many broad gauge ones. I do not say "standard gauge" because, as you surely know, Spanish and Portuguese railways were laid with a different width.

In the '30s the network was becoming unified in a few companies. The Civil War (a singularly inappropiate name for such an uncivil event) was utterly disastrous for railways. After its end all broad gauge lines were nationalised and merged into a sole company, the "Red Nacional de los Ferrocarriles Españoles", or RENFE. Popular wit soon found other meanings, for instance "Retraso Enorme, Necesitamos Fuerza, Empujen". A rendering would be: Huge delay, we need force, you push.

Narrow gauge lines, including the two standard gauge ones (they are "narrow" here, you see) were allowed to go on as private companies, to live or die by their own resources. One by one, they relinquished their concessions. The State created the new company FEVE (Ferrocarriles Españoles de Vía Estrecha), to keep some strategic lines running. I do not know if it was ever "re-christened" as RENFE was. But cars, buses, and lorries had eaten so much income from private companies that they had been unable to keep tracks in reasonable order. They were badly in need of huge amounts of money, just to restore minimal safety. Since investments are made when returns are expected, it was a hopeless venture.

In Majorca things went the same way. The once extensive network was axed down to just two lines. The one from Palma to Inca, a serious, double-tracked railway, was kept alive by the State, and then renewed and widened to metric gauge. It has been nowadays transferred to the regional government of the Balearics. Its future looks clear now. The section from Inca to Sa Pobla is to be re-opened soon. There is talk of recovering some other lines and building a brand-new one along the Southern coast. We shall see.

And the second remarkable exception in this gloomy story was the Sóller railway. There was indeed a bad stretch; lorries took all the freight, and local traffic was never heavy. A new road tunnel has been recently opened, but now the railway is well established as an attraction by itself. So the company will apply for an extension of the licence to operate the line, which expires in 2006. Let's hope they will get it, since, as a rule, States are not the best possible administrators. And, as popular wisdom puts it, "If it ain't broke, don't fix it".

The Company have plans to improve the track and rolling stock. Some trams have already been bought to reinforce the rattling veterans of the Port line. Luckily they are not new: they come from Lisbon, whose network has nearly the same gauge and voltage. After minor adapting, these excellent climbers will invigorate the service and grace the line. And let us hope that the company will keep the old ones going as long as possible too, since they are a feast for us rail buffs. It is not that easy to find trams from before the first World War still operating.

I have found the information to write the text above in the encyclopaedic "Automotores españoles (1906-1991)" by Javier Aranguren, and in two books by Manolo Maristany, titled "Carrilets de España y Portugal" and "Prodigioso tren de Sóller", the latter with photographs by Josep Miquel. Rail buffs owe a lot to Manolo Maristany (aka Manuel Maristany). When he realized that Spanish steam was going for good, he made photographs of as many engines as he could. He warned the crews of the points where he intended to be. They let off huge plumes of smoke and steam, and so he got very, very impressive pictures. Josep Miquel has been an Editor of "Doble Tracción", a very good magazine, unfortunately discontinued now. 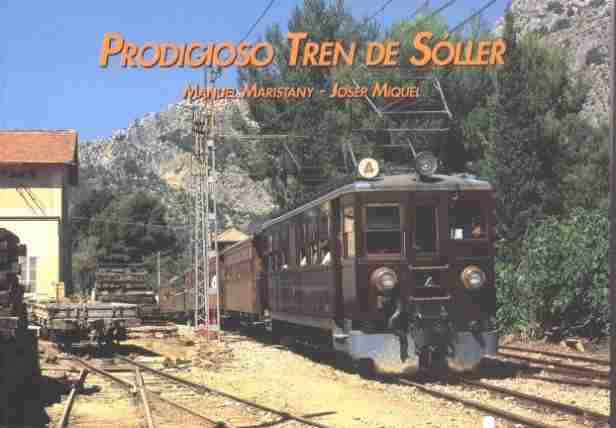 Articles in English and other languages in this website...

Spanish version of this article...