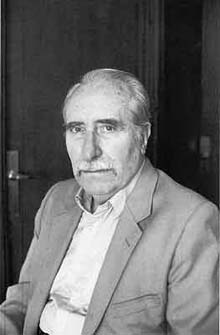 Marià Villangómez, who has died at the age of 89, was the foremost literary exponent of the dialect of Catalan spoken on his beloved Ibiza; a prolific poet, a translator of poets and playwrights, a teacher and linguist, essayist and critic. It was no surprise that three days of official mourning were declared on Eivissa - his island’s native name - which, together with Formentera and the smaller south-west Balearics, are known as les Pitiüses to distinguish them from their bigger neighbours, Mallorca and Menorca.

Villangómez made it his life’s work to give les Pitiüses their own voice - and to let Shakespeare, Aristophanes, Yeats, Joyce, Apollinaire and many other great Europeans be heard for the first time in that little archipelago’s language.

After early poetic experiments in Castilian (which was in fact his first language, in which his given name was Mariano), Villangómez worked hard to perfect his command of Catalan. He wrote almost exclusively in that language from the early 1930s until recently (he published his last book in 2000). Law, which he studied in Barcelona until 1933, was never likely to command his imagination for a lifetime: what did were the landscapes and people of les Pitiüses.

After the Civil War (he was conscripted into Franco’s forces), Villangómez became a schoolteacher, rejoicing when the job took him back to Sant Miquel de Balansat on Ibiza in 1946. The hills, the fisherfolk, the rain, the hot summers, the forests, the sturdy peasants whose children he taught for three decades, and the all-embracing Mediterranean furnished him with inspiration for his carefully-wrought poems on life and the universe as observed in their small details. He was also able to devote time to semi-clandestine classes to help ensure that Catalan did not die out in the Balearics under Franco’s centralist dictatorship.

Villangómez published poetry collections roughly every two years until 1962, when he called it a day (though anthologies have since been republished). He explained: “I don’t want to start repeating myself or to end up writing an old man’s poetry.” He said he could write many more poems but did not want to put his name to them if they were “less heartfelt, or more overloaded with technique” than the works of his prime.

Instead, he started painstakingly extending his knowledge of other languages and found in translation “an extension of my labours as a poet”. And so it was that Shelley, Baudelaire, Mallarmé, Brecht, Victor Hugo, Keats, Auden and even some mainland Spanish greats like Góngora or Alberti found their way into south-western Balearic Catalan.

Shakespeare may have been flattered had he known that A Midsummer Night’s Dream would be reincarnated in 1989 as Somni d’una nit de Sant Joan. Villangómez allowed only four of his own plays into print: the others, he implausibly claimed, “weren’t good enough”.

In 1972, he published the standard textbook on the Catalan of les Pitiüses, Curs d’iniciació a la llengua. Some of his prose pieces were published under the pseudonym Marc Arabí, taking his fictional surname from a headland on the Ibizan east coast. His last book, El llambreig en la fosca (Glimpsed in the dark), appeared when he was 87 and had already been frail for a few years.

He was allegedly working on an autobiography for ten years, on and off, but charmingly claimed he abandoned it “because it was getting just too personal”. That he had already revealed a much-loved personality through his long career was evidenced in the many public honours he received - from the local authorities in Ibiza, the Balearic Islands regional government, the Catalan Generalitat, and Spain’s royal household.

He was seen as the most distinguished figure of Balearic literature and a reference point in Catalan letters in general over the past century. Francesc Parcerisas, president of l’Institut de les Lletres Catalanes, said it would be fair to call him “a father to three generations” of writers in the language. But for the old schoolteacher himself, a tall, generous and modest character, three simple words would have been honour enough: escriptor i eivissenc: writer and Ibizan.