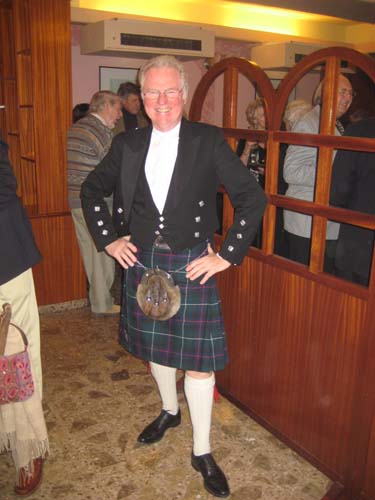 250th anniversary of the birth of the Scots poet Robert Burns

Now you have had your share of haggis - but not quite your fill of whisky, poetry and blether. It is great to see you here again, especially on this special night the 250 anniversary of Robert Burns birth date, to celebrate his art and spirit.

I'm sure that Burns would have enjoyed the good fellowship, jolly spirits and particularly the Ladies at this Supper tonight.

It is my pleasure to propose this toast and dwell for a time in the land of Burns and ruminate in the art of Scotland's Bard and greatest poet, a man whose work has been translated into more languages than that of any other, except for Shakespeare and the Bible. He was one of the first to be a celebrity in his own lifetime, and the first modern poet to be hailed as a Bard. He has always been particularly revered in the USA, whose struggle for Independence he supported, albeit clandestinely, from the start of his career. To this day there are more statues of Burns in American Parks and squares than of any home grown poet.

Through Burns' poetry we share a universal and personal experience. Sing "Auld Lang Syne" with friends and share the warm feelings and sentiment of that wonderful song. The philosophical juxtaposition between man and animal that he describes in "To A Mouse":

The best laid schemes of mice and men gang aft a gley...

In "For A' That" he is the leveller of social class:

The rank is but the guinea stamp, the man's the gowd for a' that...

In "To a Louse" Burns bursts the bubble of social and religious pretence:

O wad some Power the giftie gie us
To see oursels as ithers see us!
It wad frae monie a blunder free us
An foolish notion:
What airs in dress an gait wad lea'es us
An ev'n devotion

O ye wha are sae guid yourself,
sae pious and sae holy,
ye've nought to do but mark and tell
your Neebour's fauts and folly.

And of course Burns was the great poet, romancer, and songwriter:

My Love is like a red red rose that's newly sprung in June,
My love is like a melodie that's sweetly played in tune.
So fair thou art my bonnie lass so deep in love am I
And I will love thee still my dear,
Till a' the seas gang dry.

So simply and eloquently did Burns express his feelings that they have become part of our everyday dialogue. Without thinking we often use his words and thoughts. How often while reading the morning papers have we pondered "Man’s humanity to man" or resigned ourselves to the truth that "nae man can tether time or tide" or steeled ourselves with resolve to "Do or Die"? 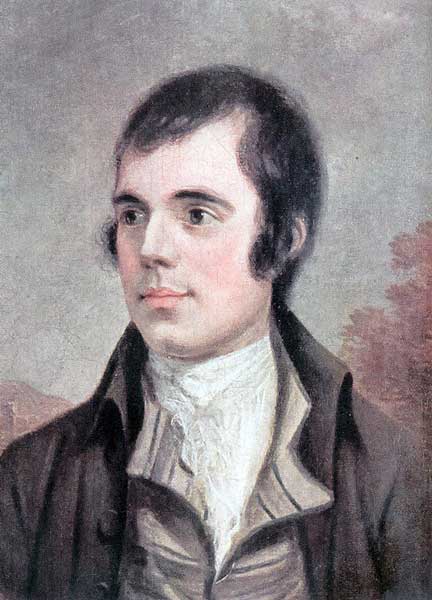 was born in Alloway, Ayrshire, on 25th January 1759, and died 37 years later July 1796. He was born the son of a very strict Calvinistic tenant farmer, and for many years his father struggled with various farms to try and make ends meet. Times were hard for the Burns family, but his father made sure his children got special tuition, and it obviously paid off in Robert's case.

When he started writing poetry he had to keep it secret from his father because it was not a proper thing to do. Two years after his father died, and through a connection in his Masonic Lodge his first book of poetry was published in 1786 when he was 27 years: "The Kilmarnock edition"... Then gradually over the next year his life changed.

To put the time of Burns's life in prospective:

The year Burns was born, Woolfe was killed at Quebec, George II died a year later, and during his life time, Boswell met Johnson, Clive left India, Cook discovered New Zealand and Australia, there was the Boston tea party, the declaration of American Independence, Louis XVI and Marie Antoniette were executed, and in the year of his death Napoleon Bonaparte assumed command in Italy and John Adams became US President.

Exciting and dangerous times, and yet with all this happening a simple farmer's son became so famous that over 10,000 people went to his funeral, and 250 years later he is remembered throughout the world.

For those who met him it was an extraordinary experience: he had incredible presence. He had such charisma that men and women were totally charmed. Within three months of his poems being published he was the talk of Edinburgh society as a literary and social phenomenon. A lady of the high society of that time wrote: "It will be the misfortune of Burns' reputation in the records of literature that he has been regarded as a poet and nothing but a poet... poetry was actually not his forte… none certainly ever outshone Burns in the charms - the sorcery, I would almost call it - of fascinating, the spontaneous eloquence of social argument or the unsullied poignancy of brilliant repartee". And she goes on to describe the almost superhuman fascination of his voice and of his eyes, those balls of black fire which electrified all on whom they rested. However it is thought that while Burns happily engaged in flirtations with the women of higher class, it was the servant girls he bedded. But it was not only the ladies who fell under his spell. Dr. Robertson said: "I think Burns was one of the most extraordinary men I ever met". As far as charisma and appeal was concerned, he was Jack Kennedy, Bill Clinton, Omar Sharif maybe, even Barak Obama with a bit of Billy Connelly devilment thrown in.

He was full of contradictions. Byron wrote of him:

"What an antithetical mind! - tenderness, roughness - delicacy, coarseness - sentiment, sensuality - soaring and groveling, dirt and deity - all mixed up in that one compound of inspired clay!"

He was a man of opposition: opposition to the narrow life denying theology of Scots Calvinism; opposition to the repressive policies of the British Government; opposition to the established order based on Class. But he was not consistent: he was a Radical who wrote Jacobite songs, a loving husband incapable of fidelity, a man of fiercely independent mind who played safe when his career was endangered. He was mercurial: you can’t put him in a box and label him.

When his Edinburgh edition was published 3,000 copies were produced, and he then toured the Lowlands, and then the Highlands of Scotland. He spent lots of his time in the company of ladies or amongst the residents of the various taverns on route. In 1788 he married Jean Armour, who had already had children by him, and was pregnant again, and they moved to Ellisland Farm in Dumfriesshire. The farm was soon found to have soil too exhausted to support crops, and as a result Burns joined the Customs & Excise. This meant that in addition to running the farm he had to cover 200 miles a week on horseback, often in the pouring rain. Somewhat ironic for a man who declared in his poetry: "Freedom and whisky gang the gither".

A new edition of poems was published in 1793 and he moved to a new house in Dumfries. Most of his free time was spent in writing songs and in the last 10 years of his life he wrote some 300 lyrics. But by April 1796 Burns was emaciated through illness, unable to work, seriously depressed, and concerned about his financial affairs. His Doctor diagnosed "flying Gout" and prescribed among other things immersing him in the sea in the Solway Firth. For a man with a serious heart condition it proved fatal. He died on 21 July 1796 and 10,000 people made their way to his funeral.

Burns lived a full life as father, husband, lover, intellectual, poet and songwriter. In his art and life he loved beauty and honesty, while despising arrogance and hypocrisy. He loved a good party, a good story, a good song, and a good drink with friends. He loved life; loved lasssies; and he loved being one of the boys. That's why we are celebrating his spirit and toast his memory 250 years after his birth.

Well, "nae man can tether time or tide". The hour approaches when even this long winded blast must blow its last. So now is the time to raise your glasses and rise. I offer the toast... to a poet of the ages... to Scotland's best loved son...to the Immortal Memory of Robert Burns.